Ever since I retired my old NAS, I’ve been running my home automation (unifi controller, pi-hole, dns, domain controller) and personal storage (NAS) on the same host as my testing setup (’lab’). The whole setup idles at ~95 Watts, which isn’t too bad when I would actively use the lab all the time, but more recently the whole setup hasn’t functioned as more than an expensive 24/7 electrical heater.

So it was time to set up a new dedicated NAS to seperate the functions again.

The closest to the requirements I got when searching for commercial offerings was the Synology 1621+, based on a Ryzen Embedded CPU. Synology products are good looking, good build quality, and they just work. However, the 1621+ does have a fan, no ECC support, no 10Gbe networking, SO-DIMMs, and starts at €900.

I wasn’t going to get that silent, low power, cheap and performant NAS this way, so I had to resort to building one myself.

The quest for a good platform (mainboard+CPU) turned out to be quite a challenge. As I’m charmed by AMD’s Zen developments, I started my search there. The platforms I considered, and why I did NOT pick them:

Before I present the final kit, I would like to make a special mention:

So by elimination, I settled for my final option, which consisted of:

Why a 9th gen i3? The i3 range traditionally has ECC support (whereas i5, i7 and i9 don’t). The 9th generation was launched in Q2'19, and for now the final generation to include ECC support. Intel decided to drop ECC support from the 10th gen on to create a better market for its much more expensive and feature rich Xeon E series.

The Fujitsu board is based on a workstation chipset (C246), has plenty of extensibility, and is known (praise the internet!) for its low idle power. The main drawback is lack of out of band (IPMI/iLO) management, but fortunately the CPU does come with an integrated GPU for initial setup, which as opposed to AMD iGPUs doesn’t lower the available PCIe lanes. An associated smaller drawback is lack of monitoring (thermal/voltage) support in VMware ESXi.

I had an unused Fractal Design Define R5 case, Seasonic 660W PSU and Noctua NH-D14 heatsink sitting around, so I used that to see how far this would take me. Eventually, I plan to build this in a dedicated case. It’s essential if you want to squeeze out the last idle Watts to also have a high performing power supply matched to the load, but that’ll also have to wait.

The total system bill of material:

Motherboard with CPU and RAM installed: 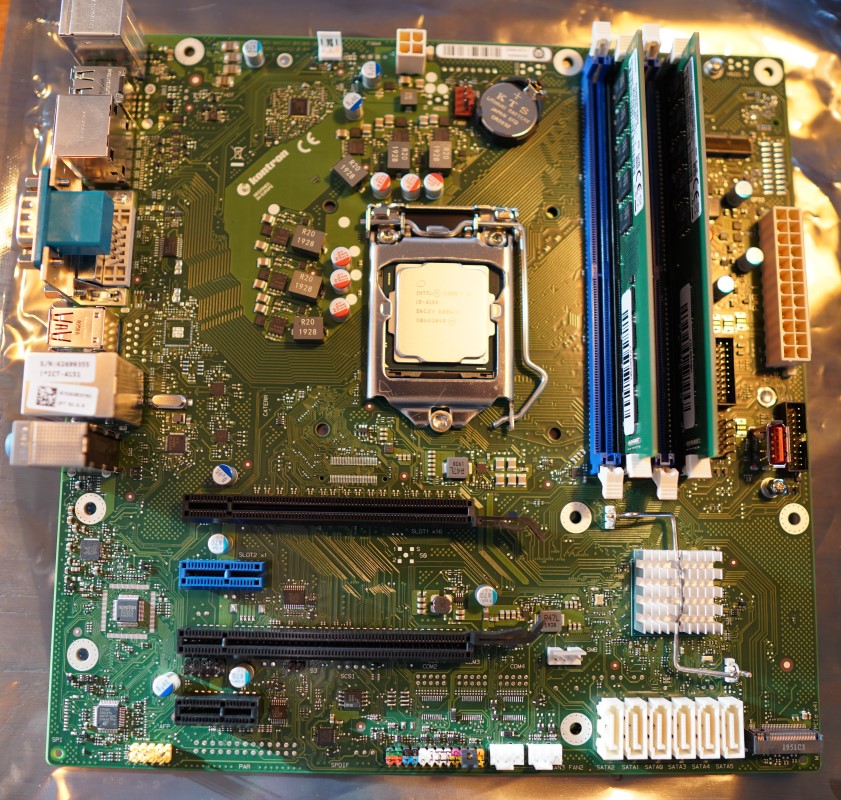 Stock i3 vs. Noctua’s guargantuan NH-D14 cooler which may even be enough to passively cool this CPU: 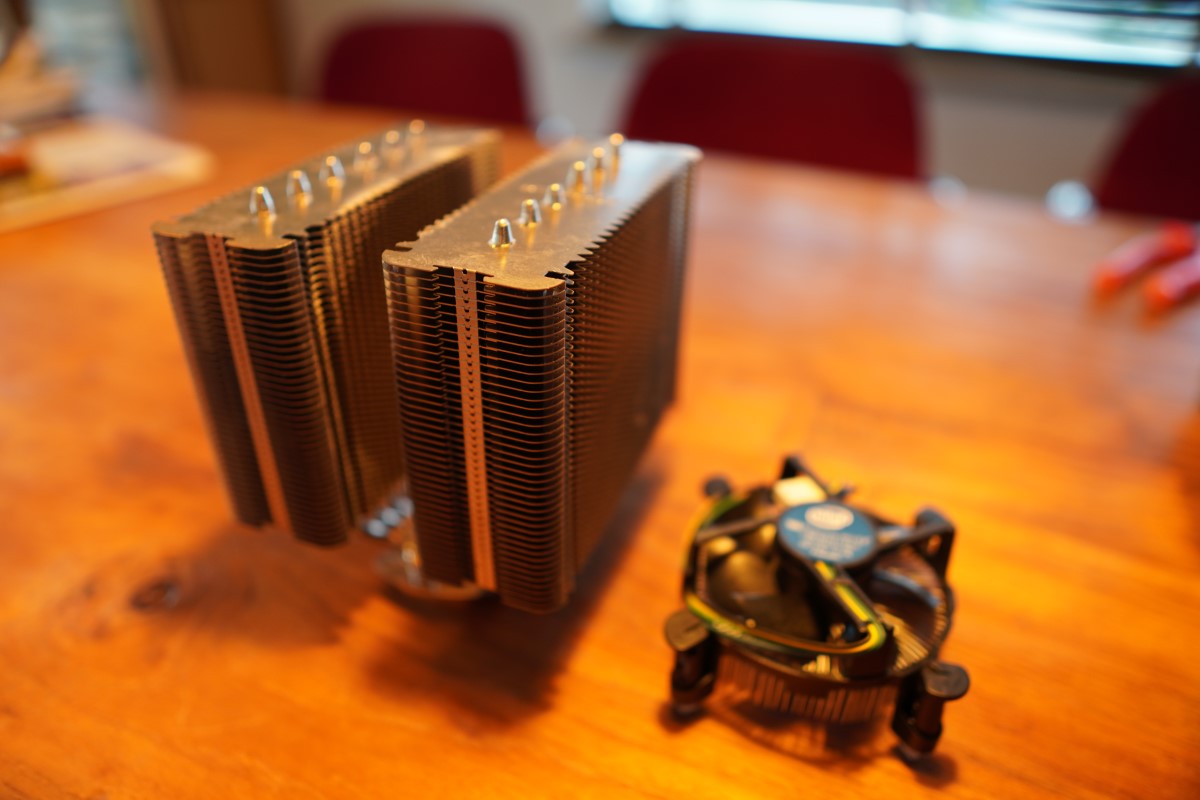 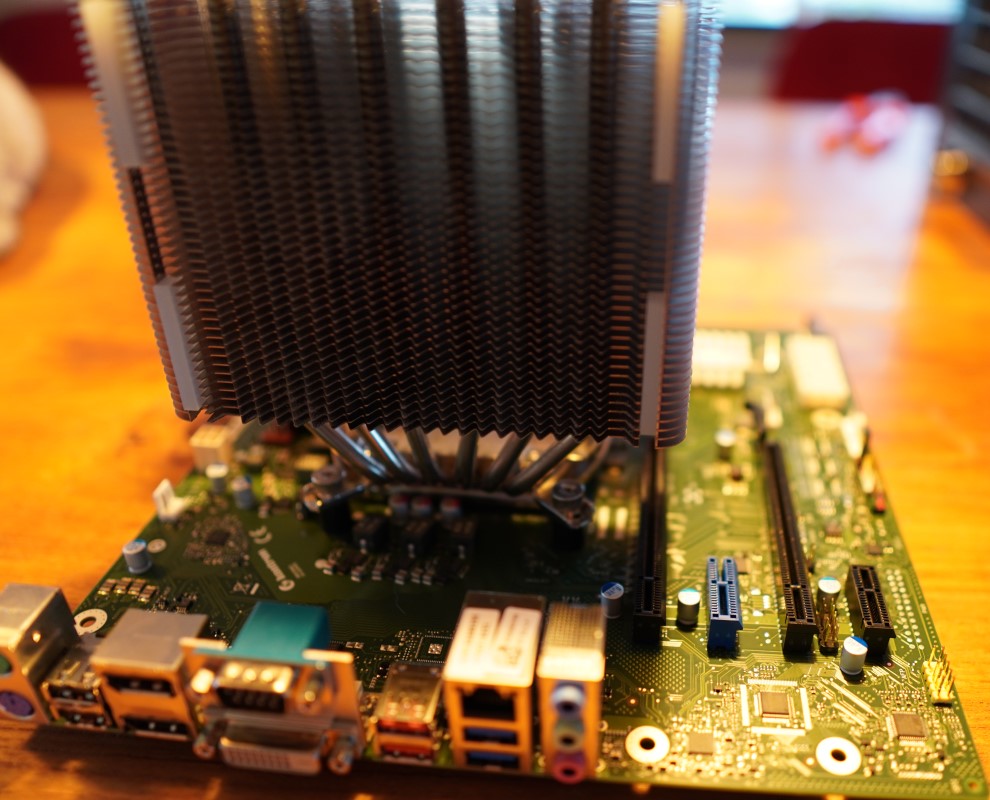 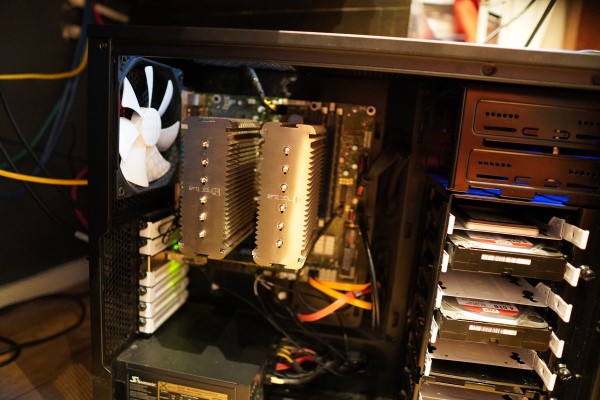 The system is now passively cooled, but not doing much. To test if the heatsink was up to the job of cooling the i3 passively, I ran a stresstest stressing all cores at 100% for a couple hours. To help natural convection, I opened up a fan mount in the top of the case. The highest CPU temperature I recorded - after running at 100% for hours - was 68 Celcius (48 degress above room temperature).

The numbers (as measured with an inline APC UPS):

I’m quite pleased with the result so far: complete silence and low power draw. I’m currently looking into a more NAS like case, a more efficient power supply, and replacing the spindles with SSDs when prices drop some more.